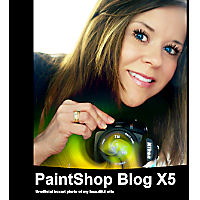 Recently, I was researching new features and release dates for Corel Paintshop Pro X5 when I stumbled on a preorder listing at nuLime.com. According to their website it is estimated that X5 will be available for shipping on September 6, 2012. BTW, the X5 boxart is obviously not official. It was something that I created specifically for this post. I like it though because it features my beautiful wife 🙂

This is the only website that I could find currently accepting preorders for X5. I can’t confirm the validity of the listing at nuLime, but I found their site does have a 7.5 out 10 rating at resellerratings with 100’s of positive reviews.

When I originally started writing the draft for this post there was only one listing for X5 preorders. Over the past couple weeks I am beginning to see many more online retail stores now accepting preorders for Paint
Shop Pro X5.  If you search for “PSPX5ULENMBAM” or “Corel PAINTSHOP PRO X5 ULTIMATE EN MB” you will find several  preorder listings. At the bottom of this post, I have posted a couple screen caps of X5 pricing and listings.

Anyway, I always get excited when there is a new Paint Shop Pro release on the horizon. PSPX4 was a major improvement over PSPX3, especially the installation times and overall performance. Further, adding 16bit tools to X4 was certainly a welcomed addition. I absolutely hated everything about PSPX3. That release alone almost resulted in me completely giving up on PSP as my primary graphics editor. X3 received a lot of negative press across the internet.  I even made a plea (along with countless other PSP) for Corel to restructure the direction of Paintshop Pro. I think they heard us because as I mentioned,  X4 saw many improvements over X3.

But without question, Corel Paint Shop Pro X2 Ultimate is the best edition of the software series to date, in my opinion. It is not bloated nor buggy, the editor is feature rich, and everything just works flawless for me. I have been using X2 since I think 2007. I occasionally will use X4 but still prefer X2. Hopefully, X5 will see even more performance and features improvements and give me enough reasons to switch from X2. As soon as Corel releases an official feature list for Paintshop Pro X5 I will post an update.

Is anyone else looking forward to or plan on upgrading to the Paintshop Pro X5 release?

Here is a Corel Paintshop Pro X5 preorder listing for $101.75 at nulime.com 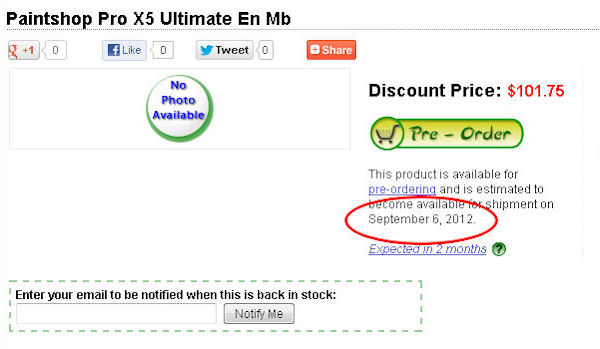 Here is another Corel Paintshop Pro X5 listing for $94.99 at macmall.com 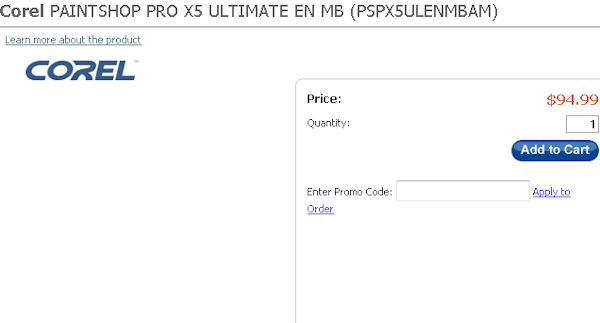 I just (August 2012) purchased Pro X4. I’m extremely pleased with it, especially when compared to previous PaintShop releases. I bought X2 several years ago, then X3, and both were barely functional programs. Really, they were some of the worst software packages I’ve ever worked with, particularly with respect to their file “management” abilities (if you want to call it that).

But the improvement with Pro X4 is like the difference between night and day. It’s stable, fast (no more waiting two minutes just for the program to load), and as far as I’m concerned, delivers great editing results (every bit as good as Adobe Photoshop, but so much simpler and faster to use).

If Corel takes Pro X4 and BUILDS UPON IT rather than changes it, then X5 should be a fantastic piece of software. But until they release it and I’ve taken it for a test drive, Pro X4 will remain installed on my computer.

It’s clear why some companies are taking pre-orders for X5, by the way. But they may be just guessing. The last two versions of PaintShop Photo Pro were released on September 7. Perhaps Corel will do the same this year, perhaps not. If that is the plan, I wonder why they’re not already hyping the new release. The date is just three weeks away, and it would seem they might want to start advertising it. Then again, they surely want to keep moving version X4. We’ll know soon enough.

I am very pleased too Edward.
X4 really utilizes the multi-core processors well. Rendering effects on larger photos in previous versions sometimes took minutes. In X4 those large photo effects are now rendering almost instantly on a 6-core processor. I have also tested X4 on a dual-core, triple-core, and quad-core computers, and the performance was great. In-fact, I installed X4 on my wife’s triple-core computer, and it out performs her Photoshop CS5 when doing common renders. CS5 on her machine is sluggish compared to PSPX4.

As I mentioned, adding 16bit tools was a welcomed addition. I really hope Corel will continue improving other tools, such as the text tool. It is still outdated to say the least. Still doesn’t support word wrap.

I’ll be honest, I haven’t opened up X12.5 Ultimate now in several weeks, and I used it daily for at least 5 years. The performance of X4 alone makes it a pleasure to use. Definitely, X3 was without a doubt, was a piece of bloated garbage(slow installation, slow load times, constant crashes, conflicted with other software, tried to manage all your files, and the list goes on and on) I actually liked X12.5 though. I don’t know if you used X2 very long, but service packs corrected most of the issues it had early on. It certainly wasn’t fast like X4 is, but it was reliable.

I am a psp user from version 1.0. I have ever purchased the X3, but it was weird to work with. Stil for about 80% I use the Jasc legendary final version PSP 9. Corel start to understand the problem that they have messed up some very nice Jasc workflow. I hope that in version X5 they improve the workflow further on. I occasionally work now with X4, it looks now more promising.

Time to ad feature to make it possible to work in CMYK-mode. Still a deal breaker. OK for Photo editing, but it fails in CMYK matter in case of other graphics e.g. text vector colours.

I use PSP X4 as my only editor and am very pleased. My print quality on anything from metal prints to 24 x 36 posters and panoramas is top notch. It was buggy when I first installed it (had to do it several times over several days), but X4 is a huge improvement over X2, but Corel does not include the handy photo downloader X2 had. My three wishes for X5 (or whatever is designated) is to allow prints to be over 10,000 pixels (horizontal and vertical) so I can print larger, to put back the photo downloader and to improve how you see and find a layer on a multilayer picture. Other than that, it is capable of performing what multiple plug-ins would perform and more. Oh, I forgot, I also use the oil/pastel and other art media in PSP to create digital art.