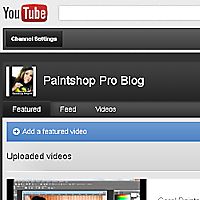 I have created several (around 40) Youtube video tutorials for Corel Paintshop Pro over the years. Most were created from 2006-2008 and had very poor video quality that made them more difficult to follow along.

A couple days ago I deleted all the old Paintshop Pro videos even though some of them had well over 250,000 views. Almost all the videos were created back before Youtube even supported High Definition. I just wanted to let my readers and subscribers know that I will be re-doing every one of those old Paintshop Pro videos in High Definition (at least 720p or higher), along with posting proper step by step tutorials here on Paintshop Blog. Most all of my future tutorials will include a web-based tutorial and a High Definition video tutorial to make learning and following along easier for my readers.

Admittedly, after the release of PSPX3 I took a long break from Paintshop Pro and lost most of my enthusiasm to share new content. Honestly, I almost gave up on PSP entirely due to my frustration over the lack of new of features and unnecessary bloat crippling our once beloved program. I even switched over to Photoshop for a period of time and considered staying there permanently.

Anyway, many longtime avid Paintshop Pro users, including myself, loudly voiced our disappointment and concerns across the internet about the direction Paintshop Pro was headed. Apparently, Corel is listening to our feedback because X4 saw major improvements. Much of the unnecessary bloat was removed or trimmed down, installation times increased, and crashes decreased. Corel also added 16 bit support for tools, proper multi-core processor support, and a host of other quality features. X4 still has a few minor quirks but overall the program seems to be headed back in the right direction. I am really impressed with the improved performance and stability. Unlike X3, I haven’t experienced any crashes or hang ups in X4. I am really enjoying using Paintshop Pro X4 which has re-stimulated my enthusiasm for the program. If you haven’t bother upgrading, then this edition has a lot to offer.

I am once again looking forward to creating quality content to share with my readers. Check out and subscribe to my Youtube channel if you enjoy my Paintshop Pro content. There are not many videos in the channel right
now, however, I will be redoing all the old Paintshop Pro video tutorials in HD over the next few weeks. Also if you need support, like the Paintshopblog Facebook fanpage. I’ll answer any questions or concern you may have there. Once again, thanks for stopping by. 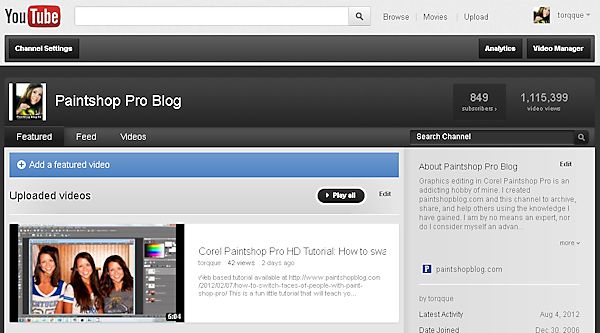